Today I am on „barrier duty“.  Open the barrier, let our Skoda drive through and close the barrier afterwards.  18 times in total on 20 kilometers. After all this prevents people to use these private forest and gravel roads for fun. But what is all this for?

Together with Jonny Trost -  Chief safety officer – and Chairman of the organising committee Wolfgang Rasper, we are riding along the special stages of this year's Lausitz-Rallye in order to draw up a detailed security plan for the DMSB and the FIA. The safety of drivers, helpers and fans stands first.

The marshals have a crucial task within the road safety. It includes a fast communication with the race control, stage commander, radio control and drivers. Also they often are the first responders in the case of a crash or accident.

There is no substitute for experience 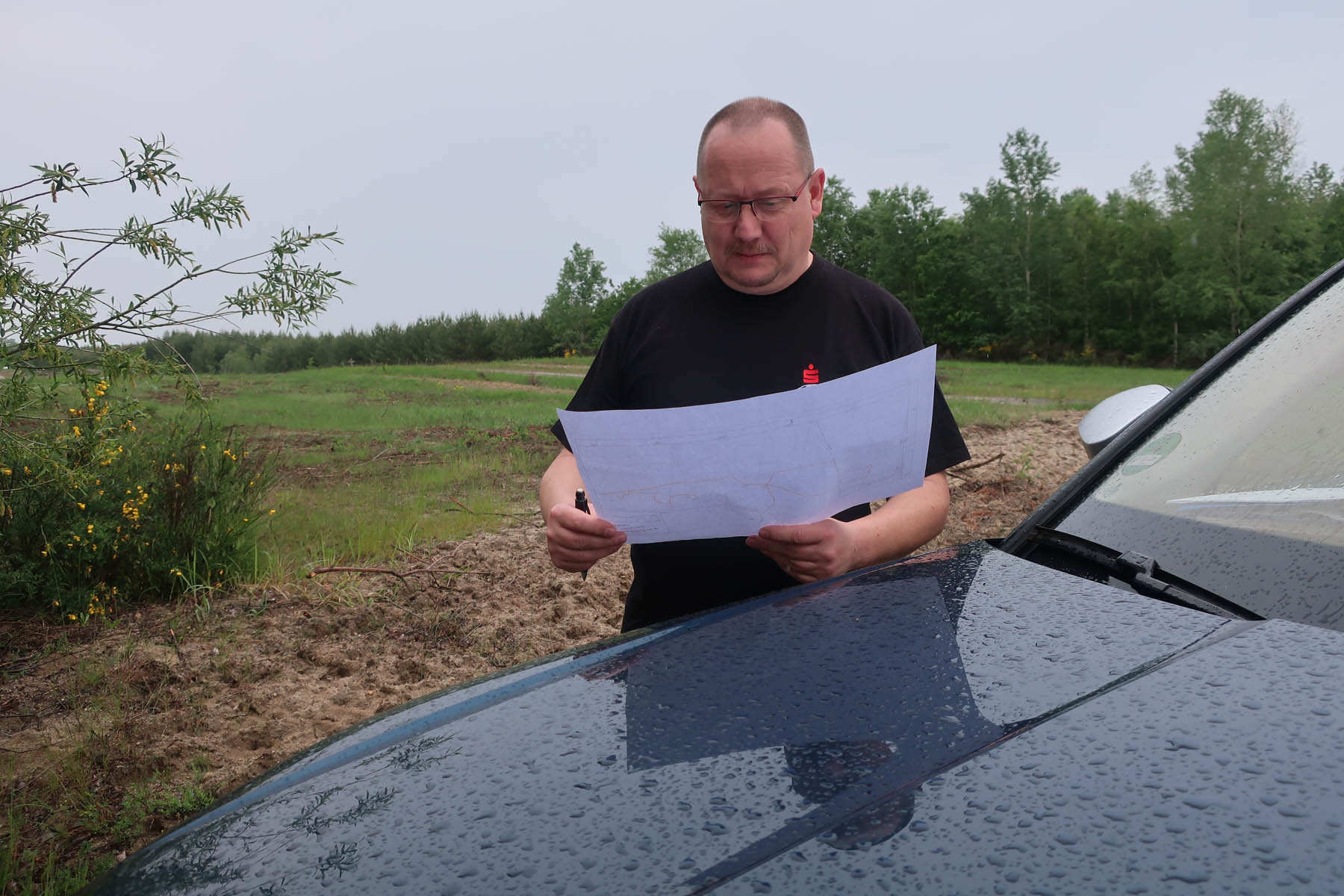 Jonny Trost, native Thuringian and now bavarian Swabian, has detailed knowledge of the procedure. The 54-year-old forwarding agency employee is a member of the Lausitz-Rallye team since 2005 and offers great experience. He worked in the same role for the Thüringen and Osterburg-Rallye and some others.  Jonny has learned his trade in GDR times and is practically grown in this scene. He started as a stage commander in Pößneck and gradually gained further qualifications, including training courses,  tests and refresher trainings every three years.

„The chief safety officer comes to a special stage, gripes a bit and leaves“, he answers my question on his tasks during the rally ironically and with a laugh.I realise that there is much more to this during our tour. The responsible and important work is considerably more extensive.

Deer, rabbits and a junction that's got the lot 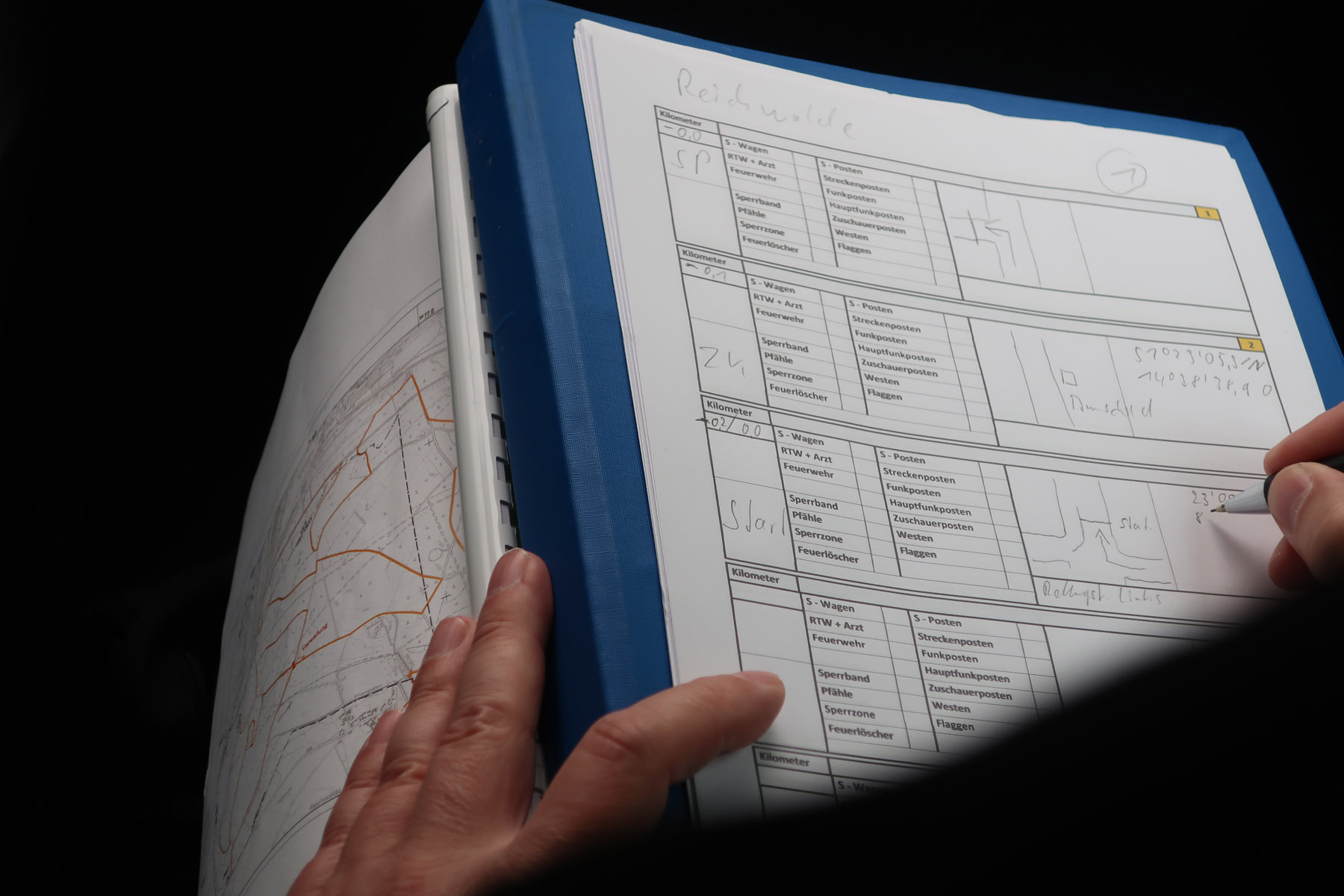 We drive on the gravel road of the „new“ special stage Reichwalde with 40 km/h. Here the fox and the hare bid each other good night, but we are lucky, we are only accompanied by a few rabbits and a deer.

Okay, the Reichwalde stage was used multiple times but the landscape changes constantly and the route is different every year. At our tour it is already clear that Reichwalde will be THE highlight again. Wide drift turns with jumps alternate with narrow passages between trees and shrubs on 20.38 kilometers. For me this is the perfect mix of Finland (fast and flowing) and Wales (forest roads)!

Jonny and Wolfgang are working with the greatest concentration. Radio control, main radio control, spectator areas and emergency exits are defined and recorded according to a fixed system. For example it is intended to have main radio controls every five kilometers that ensure a fast and smooth communication and coordination of the rescue services.  Everything is recorded on video with GPS data for retrospective checks.

They are debating about the position of the special stage start and finish, the safety measures at the inside of the turn or the repositioning of turning points. „We have to  examine potentially dangerous points like intersections where rally cars can meet from different directions and we have to examine and evaluate jumps in regard to safety.“Jonny explains and jumpsout of the car to have a better impression by foot. Also the spectator areas are chosen critically. Where can spectators access the special stage? Where do barriers have to be set up?

It took us about one hour to record five special stage kilometers and we leave the special stage „Reichwalde“ after two and a half hours. A first projection shows that approximately 60 marshals will be needed to secure this special stage. On tuesday we will work on three more special stages according to the same principle.

The most exciting point on the special stage for me: An approximately one kilometer long and wide full speed passage with three blind crests. After the last crest it is important to brake down hardly, because there is a kick turn after about 150 meters. Those who reach this point at full speed can miss the braking point. Jonny determines „that there will be an extra large deceleration zone and a main radio control.“ Wolfgang is excited too: „Those who do not drive gravel rallies don't know what they miss.“

It's the end of an intensive day. But not for Jonny. He has to enter his notes, complete the graphic maps and work on the safety plan for approval. But he is experienced in this so that teams, helpers and fans can be sure that when it comes to safety, nothing is left to chance.