Great honor for many years of commitment 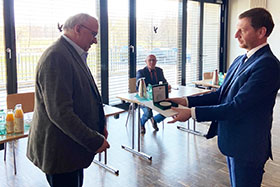 On March 31st, Saxony's Prime Minister Michael Kretschmer announced that he would be going on a working visit. It's about this year's Lausitz-Rallye and the current status of the preparations. What nobody knows in advance, however, that the club chairman Wolfgang Rasper will be given a special honor.
From the hands of the Prime Minister he received the medal "Sachsen -Land der friedlichen Revolution" for his civil society engagement. The Free State thus honors special people for special achievements. 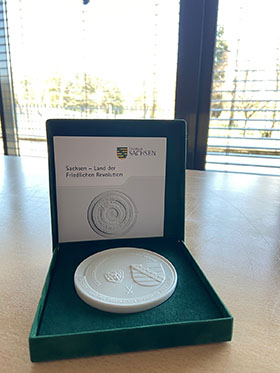 Michael Kretschmer explains the reasons: “You too, dear Mr. Rasper, have made great contributions to the club life in your community. You have been organizing the annual Lausitz-Rallye, one of the largest sporting events in Upper Lusatia, for over 20 years. The rallies represent a special motorsport event and impressive tourist offer, attract a large number of spectators, including people from the Czech Republic and Poland. You are making an important contribution to making the region better known and giving it a positive image."

The Meissen porcelain medal was launched on the occasion of the 30th anniversary of the Peaceful Revolution and German unity.

Wolfgang Rasper emphasizes: "This award recognizes the work of the entire association and the organization team, which every year try to make the Lausitz-Rallye a bit better and more attractive for drivers and fans."

The Free State of Saxony has been with its image campaign "Simply Saxony" for two years a permanent cooperation partner of the International ADMV Lausitz-Rallye. "Of course we hope to continue our cooperation in the coming years", said Wolfgang Rasper.