Matthias Kahle and Christian Doerr won the Lausitz-Rallye after a refreshing battle against their Skoda brand colleagues Julius Tannert and Helmar Hinnneberg. 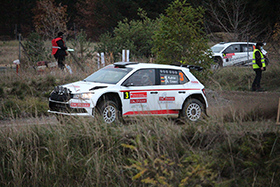 The 23rd ADMV Lausitz-Rallye will certainly go down in history as a memorable event, because the strict requirements of the local authorities and the FIA world motor sport association presented the organizer RRWC Lausitz with enormous tasks. In particular, the ban on spectators initially seemed impossible.

Fans stay disciplined and at home
But the appeals that were spread via the local media, specialist publications, the internet and social media reach the rally fans: They have understood the message and stayed at home. The Lausitz-Rallye 2020 runs smoothly and on time and can even be followed live thanks to the internet and rally radio. The organizer and the fans deserve huge praise because they have proven that a rally with an international rating is also possible under Corona conditions.

However: The typical “Lausitz-Atmosphere” with fans from Saxony, Poland and the Czech Republic is missing, as are almost 40 of the registered teams, including all Scandinavians. Nevertheless, nine Rally2 vehicles ensure a strong line-up.

Matthias Kahle and Christian Doerr, Julius Tannert and Helmar Hinneberg as well as Carsten Mohe and Alexander Hirsch - all with Skoda Fabia Rally2 cars - hold up the Saxon-German flags, the Poles are represented by Daniel Chwist (Hyundai) and Robert Kocik (Fiesta). Jan Černy (Skoda) leads the Czech armed forces and is supported by Ondrej Bisaha and Martin Vlček (both Hyundai I20 R5). Peter Scharmach, who traveled from New Zealand in a Skoda, completes the top bunch. In sunny late autumn weather, 58 vehicles roll over the ramp at Bärwalder See. 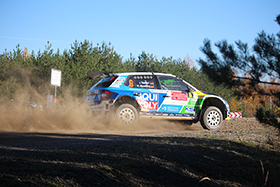 Intense fight at the top
With the best time on the “Arena” test, the "old master" Matthias Kahle took the lead, closely followed by Julius Tannert and Jan Černy, while Carsten Mohe still has to get used to his Fabia. In the Friday stage, Kahle and Tannert each achieved two best times, after 40 special stage kilometers Kahle ended the day with a 1-second lead in front of Tannert. Černy and Mohe battle it out for third place, followed by Chwist, Vlček, Bisaha and Kocik. Dark Liebehenschel leads the strong NC1 field in the Evo 9 in front of Jeffrey Wiesner, who moves his Subaru quickly on the first attempt.

On Saturday morning, 56 teams start the long Saturday stage with eight special stages over 125 kilometers. Julius Tannert got off to the best start, set the fastest time at the “Findlingspark Nochten” and took the lead with an eight tenths of a second lead. But easy come easy go: In the next test, he shoots past a branch and loses 20 seconds - a first preliminary decision. Now Matthias Kahle and Christian Doerr are leading again by a small margin.

For the rest of the day, Kahle and Tannert share the best times again, the distribution in the end is 6: 5 for Kahle. Tannert tries one last attack in the “Reichwalde” test, the longest at 20 km, but Matthias Kahle is 11 seconds faster here. Tannert: “I was doing well, I didn't make a mistake, but I couldn't get to Matthias at my first start here.” Matthias Kahle dryly: “I know my way around here best.” Christian Doerr: “We had the best pace notes“. Matthias Kahle and Christian Doerr finally win with 26 seconds ahead of Julius Tannert and Helmar Hinneberg. For Kahle it is the fifth victory, for Doerr the fourth. 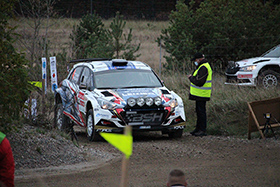 Bisaha wins the European Rally Trophy
Jan Černy and Carsten Mohe fight an equally exciting duel for 3rd place. The whole of the second day they drive almost identical times, once even on the tenth of a second. With the knife between their teeth, Jan Černy and Petr Černohorsky set the last best time of the day at “Bärwalder See” and demote Carsten Mohe and Alex Hirsch to the ungrateful fourth place. Because Daniel Chwist made two tree contacts in the Hyundai, his brand colleagues Martin Vlček and Ondrej Bisaha moved up to 5th and 6th place. That is enough for Ondrej Bisaha and Petr Těšinsky to win the FIA European Rally Trophy.

The battle for victory in the NC1 class is dramatic. Hermann Gaßner says goodbye to the top trio on SS 6 because a boulder is in the wrong place. Dark Liebehenschel and Anne Stein (Evo 7) can extend their lead over Jeffrey Wiesner and Marcel Eichenauer (Impreza N12) second by second. On SS 11 Wiesner lost the connection due to a puncture, while Liebehenschel even overtook the Fiesta R5 of Kocik with a record time. But after crossing the finish line, Liebehenschel hits a boulder with the rear end, tears off a wheel and is stranded in the middle of the track. A fire is quickly extinguished, and the test is interrupted. Liebehenschel, who has the Schotter Cup victory in mind, becomes the tragic hero of the Lausitz-Rallye. 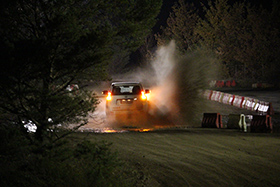 Thus, the Opel Astra drivers Bernd Knüpfer and Daniel Herzig win the Schotter Cup as the best team in Group F up to 2000 cm³, while Marc Bach and André Seelisch in the Evo 9 are third in class behind Wiesner and the Latvian Aurimas Eidziunas (Evo 9) secure the ADMV Rally championship. The failure rate is low until noon, but at the end it skyrockets: only 36 vehicles roll over the finish ramp.