Thousands of spectators were attracted to Lusatia by the perfect rally weather again. 166 challenging special stage kilometres required perseverance from teams and fans and technical reliability from the cars. Two cancelled special stages (once due to transverse cars and once due to unreasonable spectators) were small drawbacks of the otherwise top organised rally with excellent rally headquarters. 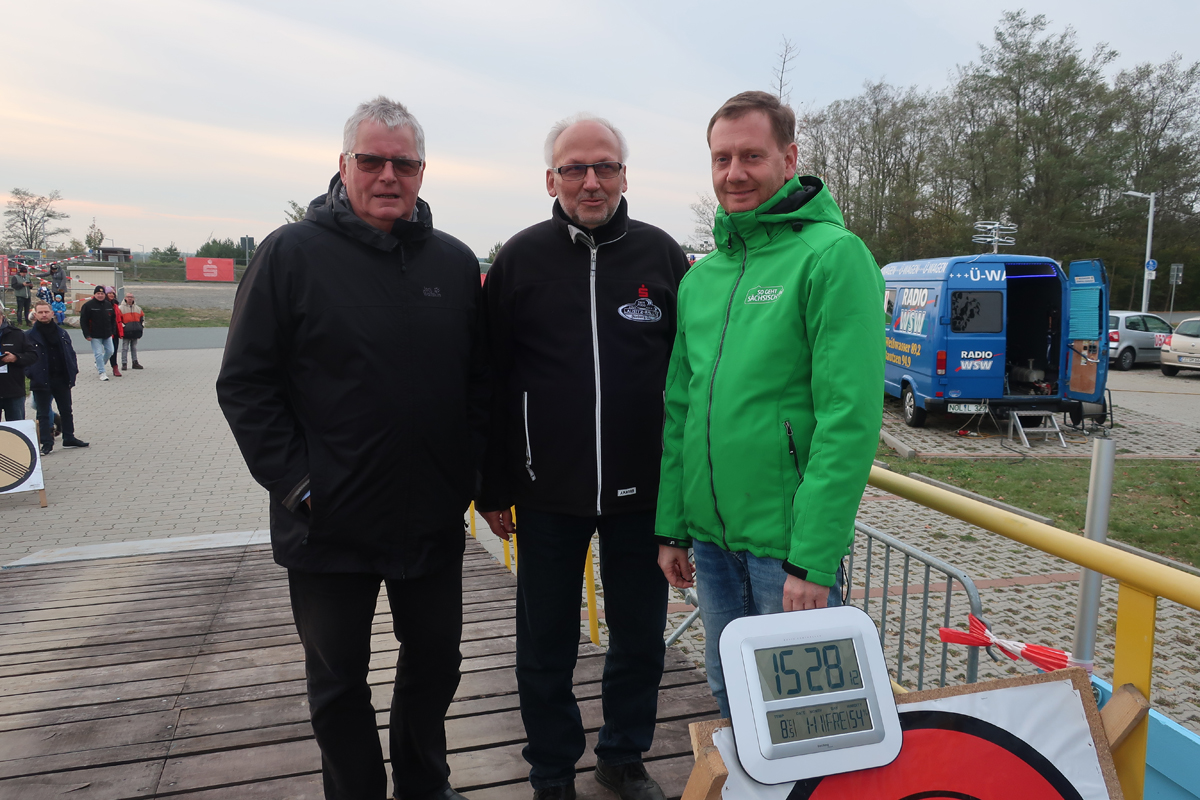 Honorary start with the prime minister
The 22nd International ADMV Lausitz-Rallye started at 15:40 p.m. as planned. Saxony’s prime minister Michael Kretschmer and the district administrator of Goerlitz Bernd Lange, opened the event.
83 participants were ceremonially seen off from the start ramp to the rally in the best atmosphere and on dusty tracks that are typical for Lusatia. All entered top teams started the rally, except one of the R5 drivers, Rok Turk from Slovenia, who cancelled his participation.

Three-way fight from the start
Right from the start of the first special stage, the expected three-way fight began. At first the duo Anders Gröndal / Magnus Fuglerud (Fiesta R5 Mk2) won the special stage with a 3.5 second advantage. Second was the Skoda pair Fabian Kreim / Tobias Braun with only 0.4 seconds before local hero and brand mate Matthias Kahle with co-driver Christian Doerr.

Right behind the trio at the top came the Czechs Jaroslav Orsak (Fiesta R5) and the Latvians Janis Vorobjovs (Mitsubishi Lancer Evo VIII) but with 15 and 19 seconds behind.

Local matador Matthias Kahle had his shocking moment already during Shakedown when his underride guard with suspension was damaged by a torn out concrete block. “In a fast right five there was a concrete block before our car. It wasn’t possible to swerve anymore,” said co-driver Christian Doerr. The service crew worked overtime to fix the dented underride guard until it fitted again. 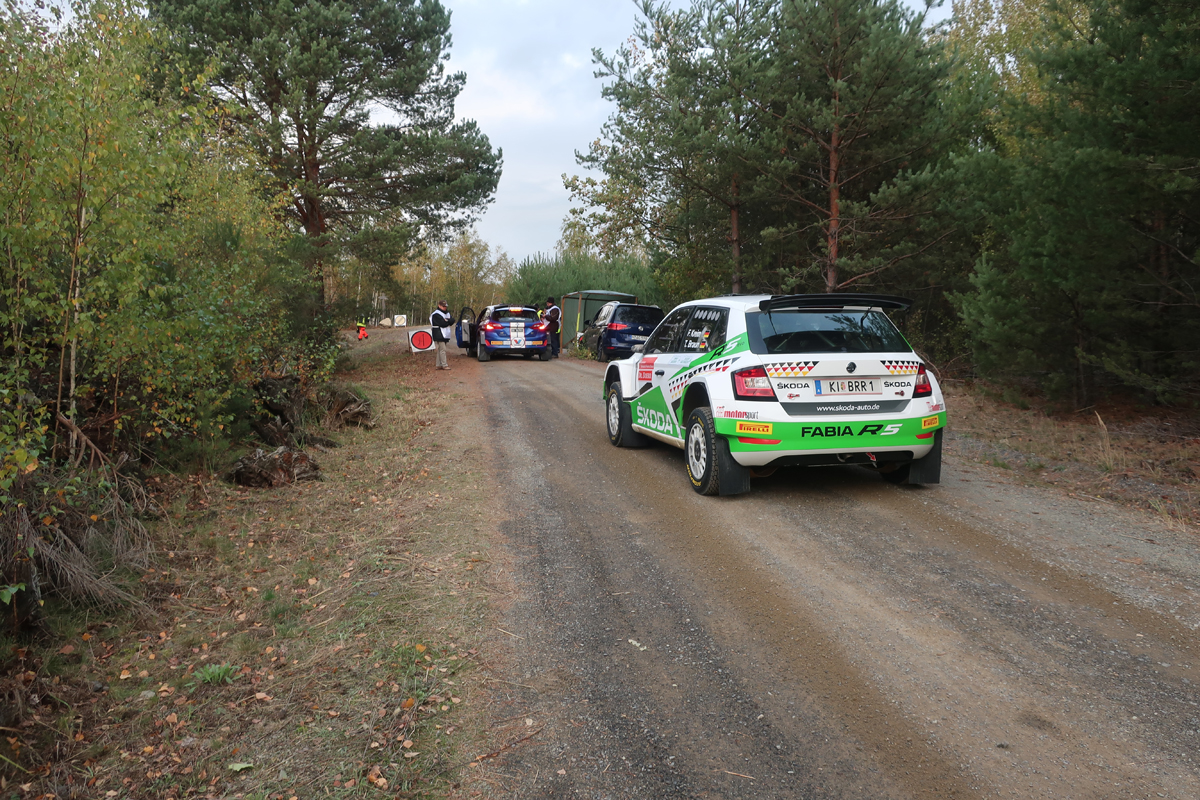 In the second round of the “Arena”, Kreim had a better run, but still had to admit a narrow defeat of 0.9 seconds by Gröndal.  At the stage finish he declared that there will be still room for improvement the next day. Kahle / Doerr lost some time in the dark but kept a narrow distance and finished the stage in third place with 4.5 seconds behind. Orsak finished the 11.13 kilometres eight seconds faster than Vorobjovs and reserved the fourth place. The past master Saku Vierimaa in his Mitsubishi Lancer Evo X joined in the top ten and remained in the ninth place.

Second victory in a row for Fabian Kreim
The second day of the Lausitz-Rallye started – as announced the day before – with Fabian Kreim’s race to catch up. He won special stage 3 with 3.9 seconds advantage before the joint favourite Anders Gröndal. Kahle /Doerr followed with a distance of 7.4 seconds in the third place.

In special stage 4 Kreim was before Kahle and Gröndal, who complained about a lack of traction and thus lost 12 seconds. On special stage 5, the favourites Kreim and Gröndal were at one level. They needed exactly 5:25.2 minutes for the 10.4 kilometres of “Nochten”. The local matador Matthias Kahle had bad luck. His co-driver Christian Doerr complained of severe back pain and was treated medically as a precaution. Cancellation!

Therefore the overall classification changed and the three-way fight turned into a duel for the first place. In “Reichwalde 1 (SS 6) Fabian Kreim was almost seven seconds ahead of Anders Gröndal and settled in the classification with 18.4 seconds advantage. Kreim didn’t want to risk too much, while Gröndal promised “full attack” that was just hindered by a motor that only ran on three cylinders in SS 8. 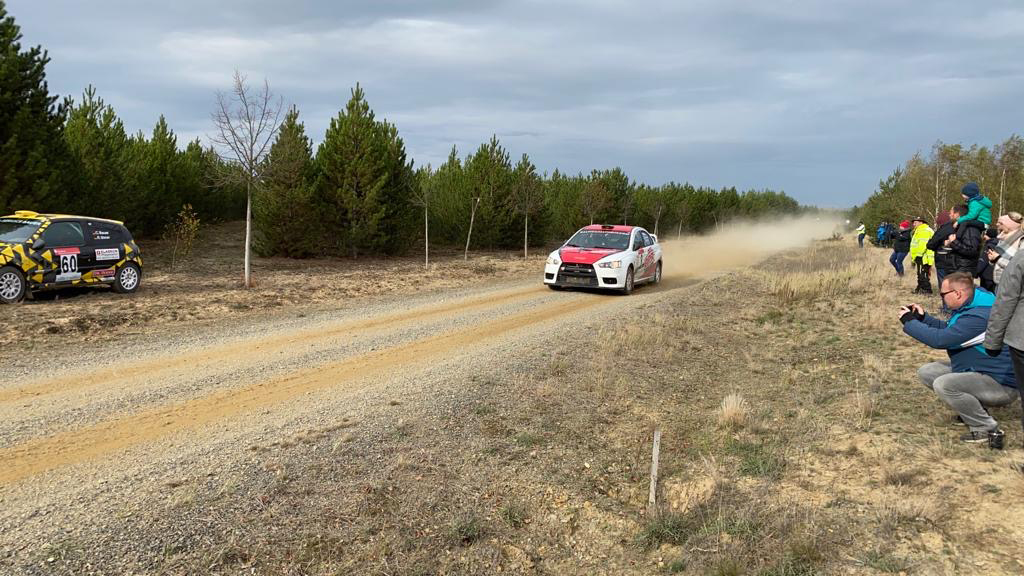 This is why Anders Gröndal fell behind the German driver and was 58.1 seconds behind on the last and longest SS 10 „Bärwalder See“ (31.70 km). By that, the race for the first place was practically over. In the end Fabian Kreim and co-driver Tobias Braun won the race very confidently with over a minute advantage before Anders Gröndal and Janis Vorobjovs.

The ERT juniors Roman Schwedt and Christoph Gerlich in a Peugeot 208 were on the second place for a long time and put pressure on the leading Czech Jan Talas who drifted off in the second last stage, so that the 20-year-old Saarlander closed the season with a victory.

By winning in the class NC3, Hannes Arndt and Christof Wagner secured their victory in the “Schottercup” as well as in the ADMV-Rally Championship.

As experience showed the challenging gravel roads were taking their toll. 34 cars didn’t make it to the finish, among them the joint favourite Matthias Kahle, the fast Czech Jaroslav Orsak, the Swedish young talent William Binbach and Schottercup title candidate Dark Liebehenschel.