On the road with „Hü“

About 200 pages thick, full of cryptic signs and – very important – only printed on one side! This is the typical design of the road book of the Lausitz-Rallye. But what needs to be done before the printed samples can be handed over to the teams? 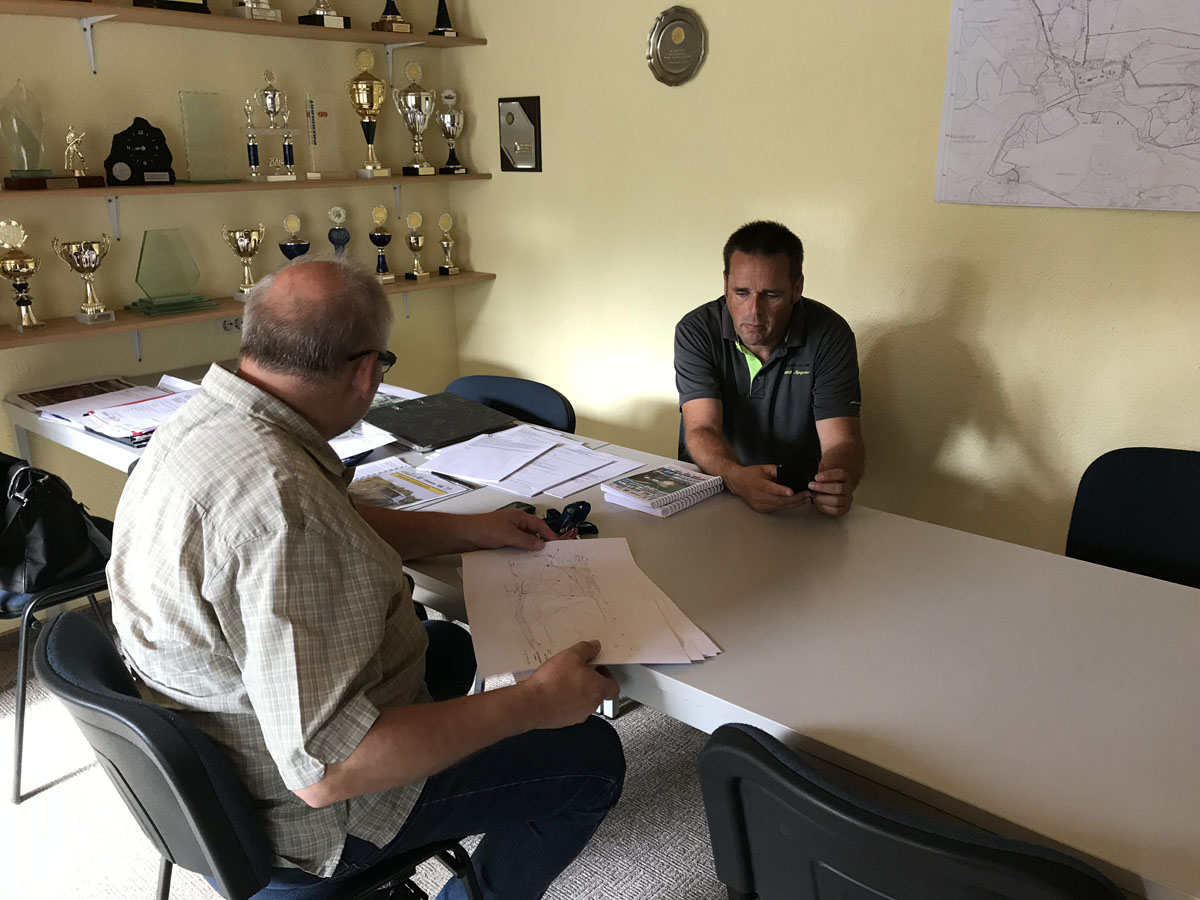 We meet with Patrick Hünniger. The 49-year-old man from Greiz answers my question on his profession: „smuggler of cough syrup.“ He has a sense of humour. In „real life” he moves the cars of a popular sports car brand in Zuffenhausen since 2001 and brings their costumers some „aha“ experiences as a driving instructor. As a former rally pilot he can perfectly put himself in the drivers' position. His rally fever already began in 1977, when he was a time keeper in the Osterburg-Rallye.

He drove his first rally in 1992 and was participating in the Toyota scouting for young talents in 1995. „I let Kahle win one time then”, the Thuringian smiles mischievously. His third overall win in the Lausitz-Rallye in 2005 and 2006 with his co-driver Ronald Bauer proves that he can drive really fast. Two who have found each other and love the rally sport, the more so as Ronald is an active part in our organisation committee.

Presently he serves at two events per year. Firstly, his home rally in Osterburg and secondly the Lausitz-Rallye. He sees the organisers as customers who buy his services and can therefore expect a high-quality work of him. Every organiser has his own preferences and specificities, so that every road book looks different. „Of course there are international normal standards but if an organiser wants his road book to be printed on pink paper, we will do this“, the tall father of a five-year-old son describes the characteristics of rally organisers and adds: “At the Lausitz-Rallye we only print on one side which considerably improves the readability“.

Why is it not possible to do it better?
We are on the road through the thicket of the Lausitz woods. Today it’s dry outside for a change and the sun even shines now and then. The trip master blinks, the Garmin Navi shows a wide light brown area without streets and the action cam is running. „Do you know what the ‘hammer’ is? A tool!“  So much for the level of our conversation. But now we return to work. Go!
The expert Hünniger has upgraded his Skoda Octavia with many technical gadgets. Thanks to Android Car System a rally app runs in the street car and simultaneously records the road. Better safe than sorry!

Patrick is an active part of the Lausitz-Rallye from the start. „Okay, I took a break for a year but apart from that I was always there“, Hü reveals. He had his personal key experience as a special stage supervisor in a turn where five or six cars went off course. „In that moment I thought: this is a very special rally that demands a lot from the drivers.“ Since 2005 he is responsible for the road book and every single year it is a new challenge because the roads in that open-cast mining area change from year to year. Therefore it’s impossible to use the previous road book as a basis.

When there is a demand for the multi man
He thought that there has to be a way to make it better and more precise and his girlfriend created a road book excel file for him. Ronald Bauer gave the finishing touches to it and improved this excel file. This is how the template for that what we need as organisers was created – a detailed „bible“ including all the information for the teams. Be it average speeds, times, road signs, special stages or road sections; to ensure a smooth operation, this detailed work is necessary. Particularly in the known road sections it is important to record the changes over the previous year and document them by photos.

During the rally Hünniger has the position of environmental officer. As a „rapid reaction force“ he is responsible for all the barriers to be open when the first zero car enters the stage and he coordinates the road construction when the first stages are hopelessly ploughed up. „This has to be done in a night shift so that parts of the stages can be used again the next day.“

Lunch break at the Bärwalder See. We gain strength for the afternoon in the „Kombüse“, a snack bar with a fantastic view of the beach and the sea. Then we continue with the next leg. To conclude, it can be said that none of us is pious but still we are experts with the „bible“.