The Rallye-, Renn- und Wassersport-Club Lausitz e.V. in the ADMV and the organising team of the Lausitz Rallye would like to thank all the supporters, rescue services, medicals, fire brigades, owners, authorities, sponsors and promoters, politicians, drivers, hotels and guest houses, as well as all the ones who are not mentioned here, for supporting us at the 19th Int. ADMV-Lausitz-Rallye 2016.

We hope that we can count on your help in the next year as well. Furthermore we would like to thank all the involved for their priceless engagement that contributed to the success of the Lausitz Rallye. Such an event can only be realised with reliable people. A rally family is where people participate 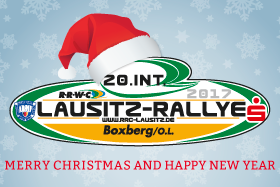 and share their ideas, so that one big whole can be created.

We hope we can count on your engagement at our anniversary rally from 02-04 November 2017 and master a further success with the additional title “FIA European Historic Sporting Rally Championship”.

We sincerely wish you a merry and peaceful Christmas with your family and a healthy and successful start into the New Year!